The Lighthouse Charter Schools are special. With an emphasis on the arts, the schools teach the skills necessary for good citizenship and lifelong learning. The resulting foundation is meant to give the students the skills needed to graduate from college. 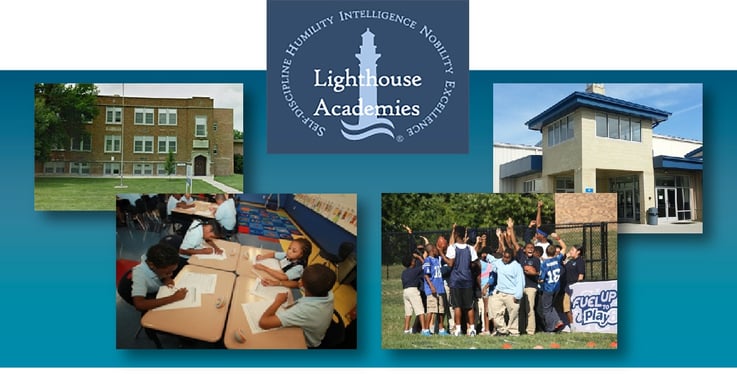 Founded in the Bronx in 2003, Lighthouse Charter Schools now have 19 schools in five states that cater to a population made up of over 89% black and hispanic students. They are flourishing due to a staggering achievement gap resulting from lifetime income inequalities that significantly affect the quality of life. Only by breaking the cycle of poverty will we transform children's lives.

Nick Kinsey, IT Coordinator, enlisted the aid of ITech Digital to keep both Lighthouse Charter School campuses safe and secure, with video surveillance and access control incorporated into their fire and alarm systems. Both campuses have similar setups with cameras placed strategically around each facility (the South Campus has 46, while the smaller East Campus has 26). In addition, the east building use 360° cameras and bullet-style cameras. Both facilities have access control on four doors leading to exits and various parts of the building which are operated by keycards, held by staff members. Their fire systems are incorporated into the access control so if the fire alarms go off, all the doors in the building open. The alarm system is set up on a schedule to be activated and deactivated as the administration deems appropriate.

For Lighthouse Charter Schools, their security system serves another purpose — holding teachers and students accountable. "It's a necessary part of running the academy smoothly," states Mr. Kinsey, "the video system assures that teachers are at their designated posts for morning admission and dismissal. It also helps to verify or deny student stories about situations that arise on a daily basis (i.e., 'I swear I didn't go to that bathroom at all today, I don't know why it is flooded'.)"

Nick Kinsey is looking forward to adding more access control to the ITech Digital video system they currently have and has enjoyed working withITech Digital while they were installing the system. "I felt the job was very large, so issues and time were definitely factors. Everything was handled by the team on-site in a very professional and timely manner. Small issues were fixed quickly and Justin(Danforth, Sales Support Manager) was very open and understanding about making changes. He made everything happen to get our system up and running."

Making a real difference in the way children learn

Lighthouse Charter Schools are making a real difference in the way children from challenged households learn, by giving them a more secure foundation. ITech Digital is assisting Nick Kinsey with a security system that enables him to run the academies safely and keep the daily routine moving ahead. He says "The students that our schools service are very unique and require very unique systems to be in place in order for them to be successful."